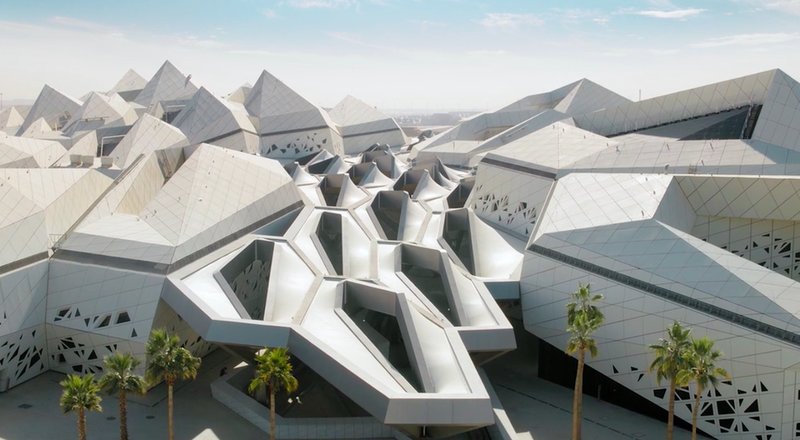 The building is located in Riyadh, Saudi Arabia, and covers 70,000m². Reflecting the building’s futuristic yet organic design, KAPSARC is dedicated to independent research into energy policies that provide social wellbeing around the world.

Perhaps unsurprisingly for a building focused around green energy, it recycles all of its water onsite and achieved a 45% reduction in energy performance. For this, it was awarded an LEED Platinum certification for its low energy and resource consumption.

It is the first time a Zaha Hadid Architects building has received the endorsement, and is not the only commendation to come its way.

Since being completed in October 2017, it has been shortlisted for the World Architecture Festival awards 2018 in the Completed Higher Education and Research category.

Esch’s video shows off the building’s rippling triangular and curved structure from the skies. It also tours the interior, which boasts sleek, spacious rooms, water features and coral-like supports.

The building consists of five central structures, including an Energy Knowledge Centre and Energy Computer Centre. A 300-seat auditorium and exhibition hall are contained within its Conference Centre, while the Research Library contains archives for 100,000 volumes.

The British-based international architect company positioned its crystalline forms to meet the desert climate of the Riyadh Plateau, where temperatures can reach 48°C and winds can be harsh.

KAPSARC’s higher southern and western sides shield from direct sunlight, while courtyards towards the northern side allow indirect sunlight into the interior.

Architectural design was by Zaha Hadid and Patrik Schumacher, while the project was directed by Lars Teichmann and Charles Walker.